Is learning to drive your New Year's resolution? Students get 5% off! Get your discount here

Ever since 1903, anyone hoping to get behind the wheel of a car in the UK has needed to have a driving licence. It wasn’t until 1934, however, that drivers actually needed to pass a test to receive their licence.

Since then, tests have changed dramatically: separate theory tests were only introduced in 1996, while the hazard perception test was introduced in 2002, followed by independent driving in 2010 and driving tests with a sat nav in 2017.

One thing has remained the same throughout the years, though: taking the test can still definitely be a nerve-wracking experience.

We here at PassMeFast have compiled the stats, the facts, and the figures, helping you find out more about how likely you really are to pass, debunking the myths and settling some scores. Read on to learn all about it!

The average pass rate across the country stands at 47%—but where you take your test can have a big impact on your chances of passing.

Spare a thought, for example, for drivers taking their test at the Belvedere test centre in south-east London: in 2015/16, only 30.3% of candidates managed to pass; the lowest percentage of any test centre in the UK.

Meanwhile, once you move towards some of the country’s most rural areas, learners’ chances of success dramatically improve. The pupils at the Isle of Mull test centre distinguished themselves in 2015/16, with 88.2% earning their licence—the best pass rate in the country. It’s worth noting, though, that there were only 17 tests taken there over the course of the entire year. (You have to feel for the two people who didn’t manage to pass.)

In fact, when it comes to the best pass rates, Scotland dominates the list: 9 out of the top 10 test centres in the UK are Scottish. Meanwhile, the bottom ten test centres on the list are all located in England’s inner cities.

Before any Scottish readers begin to gloat, however, it’s worth noting that the overall pass rate for Scotland stands at 48.4%—higher than the average for the UK as a whole, but lagging behind 4 English regions, including the North East, the South East, the East Midlands and the South West. Top of the pile, though, is Wales, whose pass rate of 52.4% stands a whopping 5.4% above the national average. 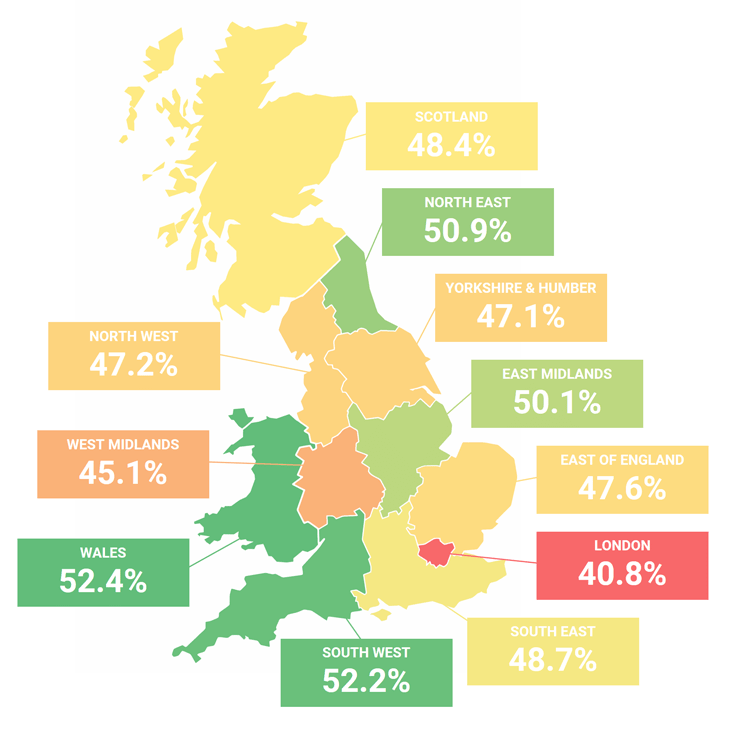 Because rural roads tend to be much quieter and more predictable than urban roads, taking the test can be easier in the countryside than in the city.

A word of caution, though, to anyone hoping to head for the Highlands in hope of passing: learning to drive doesn’t just mean getting your licence—it also means learning how to deal with the situations you’ll encounter on the roads in real life.

Whilst rural learners might find it easier to pass, therefore, they won’t have any experience driving in the city. Choosing a test centre close to home means that the driving conditions will be the same as those you’ll actually need to deal with from day-to-day.

There’s always plenty of pressure on learners to pass first time: to beat your mates, get that job interview, or simply avoid the stress of going through the test all over again.

Plenty of people will brag that it was so easy to pass first time—others, meanwhile, keep taking test after test, but never seem to get it right.

The truth is that it’s totally normal not to pass first time around; less than half of learners get their licence in one go. But it’s still far from impossible: 47.5% of all first-timers pass.

If you do happen to hit a snag on your first time, then don’t worry: there are plenty of people in the same boat.

The good news is that if you don’t get it right first time, you’re more likely to pass on your second try: 48.4% of people taking their second test pass, and 46.1% of people on their third attempt get their licence.

One thing is clear: pass rates remain relatively similar for each individual test, showing that what matters is what happens on the test day itself.

Battle of the sexes

We’ve heard all the tropes about male and female drivers over the years—but when it comes down to actually becoming a driver, which gender comes out on top?

In Greater Manchester, the margin between men and women was a little wider—pass rates stood at 48.4% for male drivers, and 40.4% for female drivers.

There’s good news for both genders, though: since 2007/8, both genders have seen pass rates increase by more than 3%, with almost three-quarters of a million new drivers getting their licence in 2015/16.

Now that we’ve sorted out the battle of the sexes, we move onto the next big competition: are older drivers really better than younger drivers?

It’s certainly true that a driver with years of experience on the road is likely to be better prepared to deal with a wide range of situations than someone who’s just got rid of their ‘L’ plates.

When it comes to actually passing your test, however, younger drivers are streets ahead. 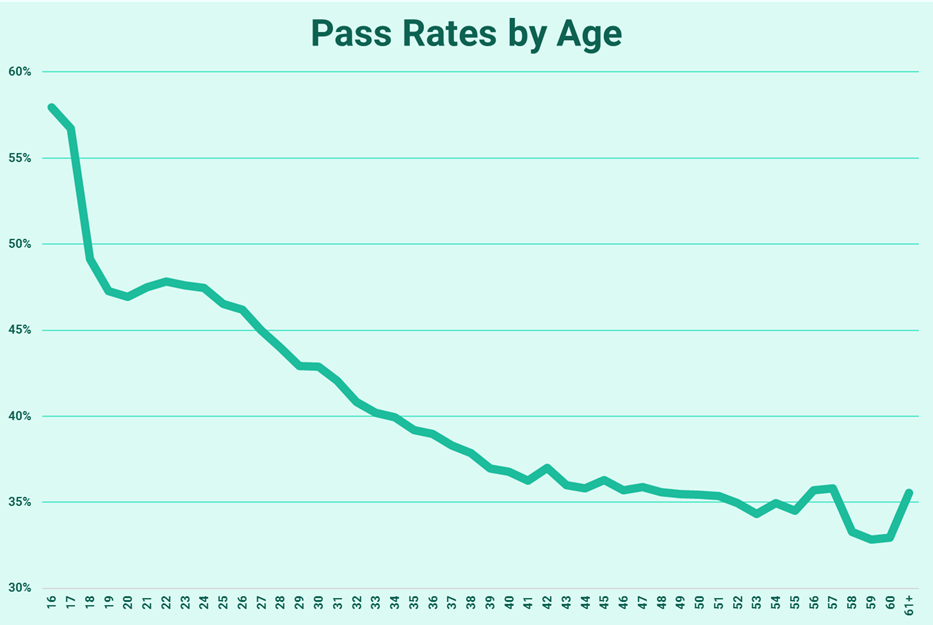 As you can see from the above graph, the youngest drivers of all—17-year-olds, as well as the small handful of 16-year-olds allowed to take their test early—have some of the highest pass rates in the country.

Intriguingly, the pass rate then sharply dips—18-year-olds are actually 7.6% less likely to pass than 17-year-olds, with the trend suggesting that the older you are, the slimmer your chances of passing.

If you are an older learner, though, don’t be discouraged! You’re never too old to get behind the wheel—70-year-old Richard Hargreaves passed his test with PassMeFast just a few months ago, proving that age is no limit!

There are plenty of other surprises to be found when searching through the vast amounts of driving test data.

Did you know, for example, that the pass rate for first-timers is actually higher than the overall pass rate? It’s true! In 2015/16, 47.5% of people taking their test for the first time passed—compared to an overall pass rate of 47.0%.

Pass rates can vary dramatically for so many different factors—so it’s no wonder that many people are worried about taking their test.

Learning with PassMeFast is different.

Instead of a traditional driving course, which is spread out over months (or even longer), PassMeFast offer intensive and semi-intensive courses, where you can learn to drive in a matter of days. This means that, instead of waiting around and needing to refresh what you’ve covered in your previous lessons, you’re constantly building up your knowledge, ensuring you’re ready for your test.

Better still, PassMeFast offer fast-track practical tests, meaning that you could take your tests weeks or even months ahead of standard DVSA waiting times.

What’s more, we evaluate every member of our team of DVSA-approved driving instructors, ensuring that you can pass your test quickly without compromising teaching quality. To top it all off, we have a range of online resources covering every aspect of learning to drive.

Choosing a course with PassMeFast means a shorter road to driving. Check out our guide to crash courses, or get in contact with us to find out more—or book a course and take one step closer to getting on the road.

Want more helpful guides to driving in the UK? Visit our blog!