Signs and signals play a key role in helping to keep drivers safe on the roads—but it isn’t just permanent signs you need to look out for. Certain authorised people can also direct you by giving you hand signals. But because you probably won’t see the police and others using hand gestures all that often, you might not recognise them when you do. We’re here to help rectify that.

We'll take you through who has the authority to stop your vehicle, what those arm signals will look like, and how you can respond in kind. By the time we're done, you'll be ready for any and every (non-rude) hand signal that comes your way.

Who are the ‘authorised persons’ who can signal you to stop?

Although there are a number of road users who might give arm signals—car drivers and cyclists among them—there are certain authorised people whose signals you must obey by law. These are:

These people will all be in official uniform that identifies them as a person with the authority to direct traffic. You can be issued with a fine, points on your licence or a driving disqualification for failing to do as they direct.

During your theory test, you may be asked to correctly interpret a specific hand signal made by a police officer or other authorised person; when it comes to revising, we advise buying resources like the official DVSA handbook or the AA theory test book. They both contain official DVSA questions with answers. Revise them thoroughly—they could show up on your test.

What hand signals do police officers use?

Traffic approaching from the front must stop 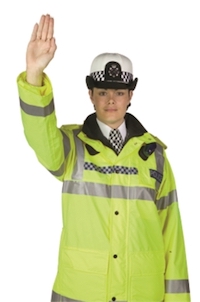 Traffic approaching from behind must stop 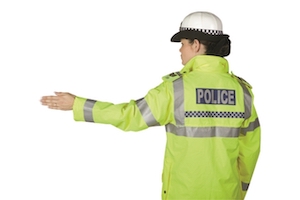 Traffic approaching from both the front and behind must stop 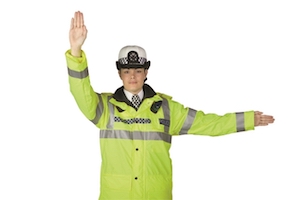 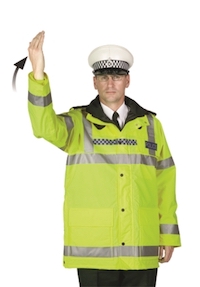 Beckoning traffic on from behind 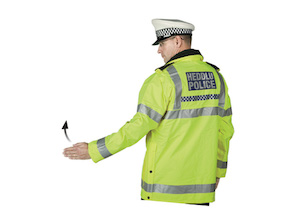 Why would a police officer direct traffic with hand signals?

Police officers are tasked with maintaining law and—crucially, here—order. Cops often attend road accidents as part of their day to day work, and so one instance where you might see an officer giving hand signals is to direct traffic safely around an accident.

Occasionally traffic lights can break, and at a particularly busy junction, you may see a police officer controlling traffic flow there instead. You must obey any signal a police officer gives you. If you don’t, you’re breaking the law. The officer will usually be identifiable by their hi-vis jacket, with ‘POLICE’ written on it. They will also have other uniform on, likely including a police hat.

Will a police officer pull me over using hand signals?

Usually, when a police officer wants to pull you over, they’ll be in a patrol vehicle or an unmarked car and will use blue lights and their indicators to tell you to stop. However, sometimes an officer might be on foot and will indicate where you need to pull over using hand signals.

On busy pedestrian school routes, you may also come across authorised persons, clad in fluorescent jackets and usually wearing a hat. You might know these as lollipop people, and they don’t use arm signals in quite the same way as, for instance, the police. School crossing patrols carry a signpost (or giant ‘lollipop’) to assist them in making their message clear. Look at the way they are holding their lollipop to ascertain what they’re asking of you. You are legally obliged to stop when they signal you to do so. You risk endangering pedestrians, many of them children, if you don’t.

Not ready to cross pedestrians 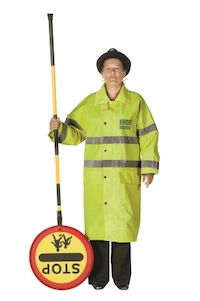 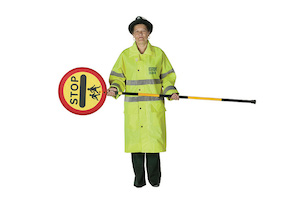 Ready to cross pedestrians; vehicles must be prepared to stop 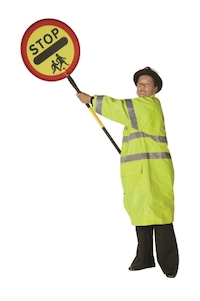 All vehicles must stop 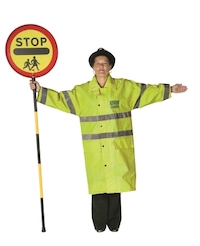 It’s not only authorised persons who can use hand signals; drivers, cyclists and horse riders can also signal with their arms. The difference is that they are more often used to signal their own intentions, rather than to direct other people. Of course, drivers should primarily use their vehicle indicators to let other road users know what they’re planning. But sometimes you may wish to emphasise a certain movement, or find that one of your indicators has broken. In these instances, it’s appropriate to use hand signals.

I intend to move left or turn left 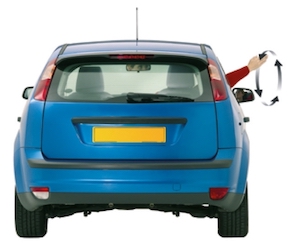 I intend to move right or turn right 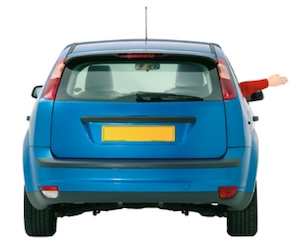 I intend to slow down or stop 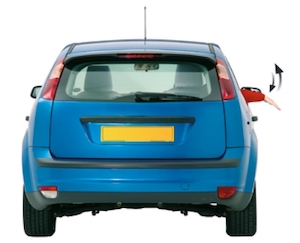 How can I use hand signals to respond to police or other authorised persons?

Communication goes two ways, and if you need to tell someone directing traffic where you’d like to go, arm signals are the way to do it. There are different actions for indicating that you want to go straight on, right or left. Remember, this doesn’t give you the final say; you still have to follow police hand signals or directions provided by another authorised person.

I want to go straight on 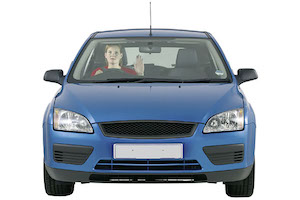 I want to turn left 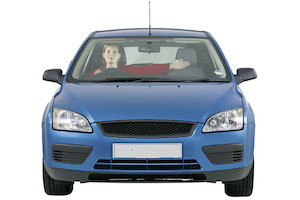 I want to turn right 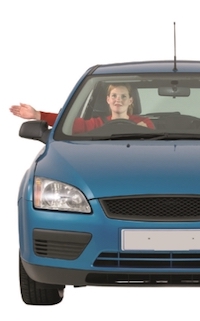 There’s a difference between police officers patrolling the roads and Highways England traffic officers. The latter don’t have as much power as the police, but, crucially, they are still able to direct traffic on motorways and some A roads. They can pull over any vehicle on safety grounds, as set out in the Highway Code rule 108. DVSA officers are, again, slightly different. They are allowed to direct traffic on any road at all. It’s an offence to ignore any signals made by a DVSA or traffic officer.

② Will I be asked about arm signals on the theory test?

During your theory test, you may be asked to correctly interpret a specific hand signal made by a police officer or other authorised person. It’s important that you’re able to do so, because you’ll get into trouble if you fail to stop when asked to on the roads.

③ Will I be asked to show hand signals on my practical test?

It would be very unusual to be asked to demonstrate hand signals during your driving test—but you need to know them so that you can respond appropriately if another driver or authorised person signals to you this way. Should your indicators or brake lights fail, your examiner will probably terminate your test early. However, this would also be an opportunity to show that you have a good understanding of the manual signals that should be used in these circumstances.

④ What other signs and signals do I need to know?

In order to pass both of your driving tests and stay safe on the roads, you need to know about a number of other signs and signals in addition to hand gestures. Check that you’re confident on: