In the not-too-distant past, those passing their driving test would receive a paper licence as proof of their newly acquired skills. Since 1998, though, we've been carrying around photocard driving licences instead, with paper licences abolished altogether in 2015.

In this guide, we'll walk through everything you need to know about photocard licences. So, whether you're wondering what all the information on the card means, want a primer on the history of photocard driving licences, or simply want to know when you need to carry it, we've got the details you need!

The origins of photocard driving licences

Driving licences have been around for well over a century, having first been introduced in the UK in 1903. Over that time, they morphed from red booklets to green sheets of paper before finally taking the credit card-style form we know today.

Interestingly, the history of this type of licence begins not on our shores, but over in Brussels. In 1991, the then-European Community decided that, since nationals of each member state could freely move across all the others, driving standards needed to be as equal as possible across the bloc.

To this end, they issued the catchy-sounding Directive 91/439/EEC, which required drivers in all member states to take both a theory and a practical test in order to obtain a licence. It's for this reason that the UK introduced the theory test for the first time in 1996.

Meanwhile, the licences themselves needed to have a common format, so that they could be easily understood no matter where European citizens were driving. At first, this was to be a six-page booklet. However, in 1996, a further directive altered this, requiring instead that the driving licence be a plastic ID card.

Each country had until July 2001 to bring the new style of licence in, with the UK choosing to phase photocard licences in between 1998 and 1999. When introduced, the new photocard came with a 'counterpart' paper licence, used to display any endorsements (points).

Those who passed before the introduction of photocard licensing were (and still are!) allowed to keep their old-style paper licence until it expires—usually on the holder's seventieth birthday.

How have photocard licences changed?

While the introduction of photocard driving licences in 1998 is a major part of our story, it marks a beginning rather than an end point. Since then, licences have continued to evolve to reflect improved security features, as well as getting some cosmetic changes, too.

The largest changes came, once again, in response to a European directive. In 2006, the EU decided that the existing common format didn't go far enough. Instead, a licence that would be mutually accepted across the union was needed, with members required to implement the decision by 2013.

Now, anyone with an EU licence can drive in the UK—and, in return, the UK licence is valid across all member states as long as the country is part of the EU. Only when the licence reaches the end of its validity (usually after 10 years) does a driver need to exchange it for a UK licence.

The new, common EU driving licence model came with extra features, making it 'tamper-proof' and protecting against fraud. Licences must be renewed every 10 years with a new photo.

One of the most noticeable changes on the part of motorists, though, was the scrapping of 'counterpart' paper licence. This was made possible because the information which once needed to be displayed physically (such as points or endorsements) can now be accessed digitally via the DVSA's system.

This means that anyone who passed between 1998 and 2015, and received both a photocard and counterpart, could safely discard the latter, which no longer has any legal force. (If you passed even earlier, though, and only have a paper licence, don't get rid of it—it's still valid until 2033!)

As well as these more substantive changes, the UK photocard licence also received a bit of a makeover. The key difference is that, in addition to the EU flag displayed in the top-left corner, a Union Flag can now be found on the front of every UK licence issued from July 2015.

Note: the changes made since 2015 do not apply to licences issued in Northern Ireland, which continue to consist of a photocard and paper counterpart.

What information is displayed on a photocard licence?

We've got to know a lot about how the photocard licence became the document it is today—but what's actually on the card? We'll take a look in detail.

On the front of the card, you'll see the photo of the licence holder, overstamped with the date on which the licence ceases to be valid. To the right of this is a numbered list showing key details about the driver, with the categories as follows:

1. Surname 2. First name(s) 3. Date and place of birth 4a. Date of issue 4b. Date of expiry 4c. Issuing authority
5. Driving licence number 7. Signature 8. Address 9. Vehicle categories for which the licence is valid

On the back of the card, you'll see a symbol to the left. For licences issued between January 2013 and February 2014, this will be a steering wheel; for those issued after this date, it's a traffic light. Don't panic about the 'amber light' it displays—this is simply a security feature, and does not bear any relation to any points!

To the right of this, there's a table. The first column, labelled 9, includes a list of categories, each with an illustration of what the letter in question represents. Column 10 shows the date on which your licence became valid to drive a certain category; column 11 shows the end date of this validity. If there are lines in a row instead of dates, you are not entitled to drive that category of vehicle.

The final column, 12, includes any codes relevant to your licence. If 01 appears in this box, for example, it means that eyesight-related restrictions apply to you when you drive that category of vehicle, such as needing to wear glasses or contact lenses. For a full list of what these represent, read our article on driving licence codes.

Who needs a photocard driving licence?

Now that you know virtually everything there is to know about UK photocard licences, you may be thinking: do I need one? Wonder no longer. Check out our list below to see whether you need a licence.

How do you get a licence? 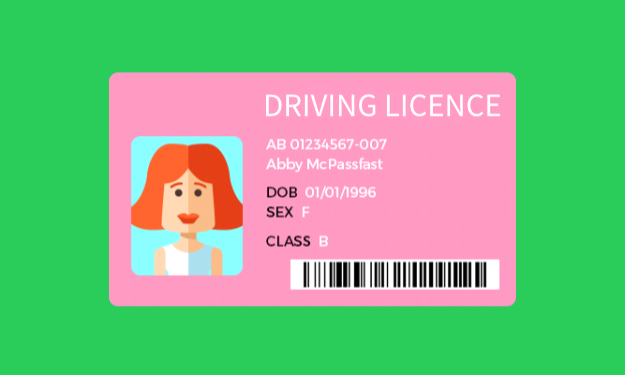 Need to get your hands on a photocard licence? We'll walk through the process for you here.

If you need a provisional licence, you must apply to the DVLA to obtain it. The simplest option is to apply for your licence online for a fee of £34. Alternatively, you can apply by post, which costs £43, with the necessary forms available from your nearest Post Office. For a full rundown of everything you'll need to provide, and the steps you'll need to take, visit our guide to applying for a provisional licence.

For those of you who need to exchange a foreign licence for a UK photocard, you must do so by post. This involves ordering form D1 from the DVLA, paying a fee of £43 and providing any supporting documents.

On the other hand, if your green provisional licence is safely in your wallet, but you're looking to upgrade it to a full pink photocard licence, you'll need to take theory and practical tests. If you're a new driver, you'll need to take lessons in order to gain the skills necessary to pass.

Sound like you? We can help! Our range of courses are designed to help learners become fully fledged drivers, ready to take to the road armed with their very own full UK photocard driving licence. With options for beginners, quick pre-test refreshers, and everything in between, we can help you to pass in just weeks. To learn more, check out our course prices and compare everything we offer.