There are over eight million provisional driving licence holders in the UK. That's roughly one in every eight people who are eligible to learn to drive—and, while not all of them are looking to get on the road any time soon, statistics from the National Travel Survey suggest that at least 15% of provisional licence holders want to learn within the next year.

This number might not sound huge, but it represents 1.2 million people looking to pass—in just one year. This in turn means there's always plenty of demand for driving instructors. But just how easy (or hard) is it to find an ADI? In this article, we'll take a look at the number of ADIs on the road, and see how the statistics regarding driving instructors have changed over time.

How many ADIs are there today?

Before we turn back the clock, we need to get an idea of what the current picture looks like. The most recent figures show that there are 39,195 Approved Driving Instructors (ADIs) on the DVSA's register. This works out at roughly one ADI for every 208 provisional licence holders—so, it's understandable that demand is often high.

If you're wondering why these numbers aren't any higher, there are some good reasons. Becoming an ADI is, after all, a time-consuming process. You'll need to be over 21 and have held a full clean UK driving licence for a minimum of three years. After that, there's an additional driving theory and practical test to sit, both of which are significantly harder than those you'd sit as a learner driver—plus a third test, covering your teaching ability in an example driving lesson.

It's also worth remembering that an ADI licence isn't for life. Each instructor must re-register every 4 years—and, while you won't need to go through the full process again each time, you must take at least one standards check in each 4-year period. Fail this, and you'll lose your right to practise as an ADI.

The challenging nature of joining the register in the first place, need for regular reassessment, and factors such as retirement and illness mean that the number of ADIs can fluctuate. But is the situation better or worse than it has been in the past? Thanks to the DVSA's statistics, we can find out.

How has the number of ADIs changed over time?

The DVSA provides a wealth of statistics on exactly how many ADIs are on the register, with month-by-month data available dating back to April 2011. Over that time, there has been a marked drop in the number of driving instructors—down from 47,074 to 39,195 across the UK. 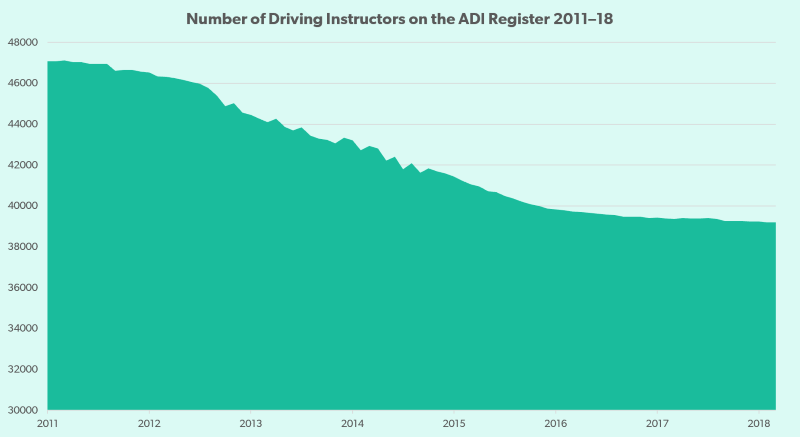 On the face of it, this trend is worrying—with almost one in every six driving instructors leaving the profession. Turn back the clock a few years, though, and the reasons behind the decline become clearer: following the 2008 financial crisis, the numbers of people learning to drive started to plummet. In fact, the number of driving tests conducted fell from just under 1.8 million in 2007/08 to just over 1.4 million in 2012/13—a drop of 18%.

Since then, the number of hopeful motorists has risen, with tests taken in 2017/18 back up to a healthier 1.7 million—but without any corresponding growth in the number of ADIs on the register. This means, for the time being, that demand for ADIs is likely to be higher than it was a few years ago.

Don't despair, though—there is cause for hope. Firstly, the rate of drop-offs has slowed, with numbers having remained fairly steady since early 2016. Secondly, the number of applications to become a Potential Driving Instructor—i.e., hopeful future ADIs—has risen steadily year-on-year, growing from 4,985 in 2011/12 to 7,635 in 2017/18. Meanwhile, last year saw the highest number of new additions to the ADI register of any year for which data exists—a whopping 3,339, way up from the nadir of just 1,324 in 2015/16.

How have things changed across the country?

While there are certainly fewer ADIs nationwide than there were a few years ago, the picture varies in different parts of the UK. Some areas have seen especially dramatic falls in the number of driving instructors; others actually have more than in the past. We compared figures from six years apart—between June 2012 and June 2018—to see how things progressed across the country.

The hardest hit area of the country was the Harrogate (HG) area, which lost 38.2% of its ADIs between 2012 and 2018. Not far behind were Carlisle (CA) and Blackpool (FY), both of which saw more than one in four ADIs leaving the register. A handful of areas saw small increases: the WC and EC postcode areas in central London, together with Kirkwall (KW) and Llandrindod Wells (LD). To view the changes in your area, check out the map below.

How have ADI pass rates changed over time?

The number of ADIs on the road is certainly a key stat for any aspiring driver—but it's not the only figure worth paying attention to. Remember those ADI tests we mentioned earlier? The DVSA releases pass rates for these tests, just as they do for the standard practical tests taken by a learner driver. 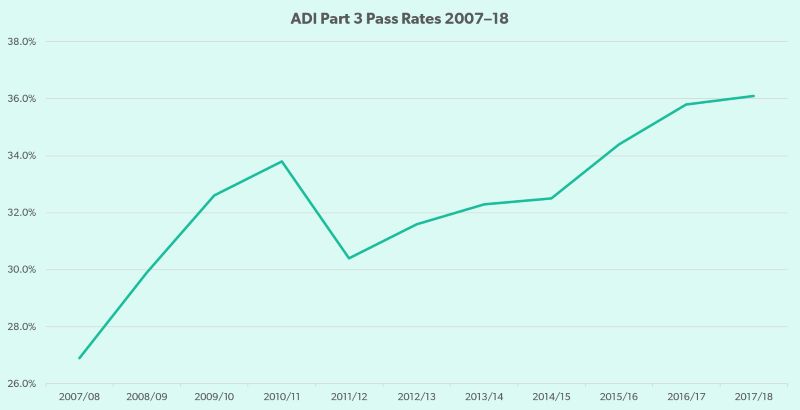 Interestingly, the pass rates for the ADI part three test—the final test, which confers the ability to practise as an ADI—have risen in recent years, in contrast to falling pass rates among normal drivers. This is a notoriously difficult test, with pass rates having been as low as 26.9% back in 2007/08—so it's good to see these figures are on the up!

I'm a learner driver—how will the stats affect me?

It's certainly true that, with fewer ADIs on the road just as the number of learners is on the up, demand is high. It's natural to worry, then, that getting on the road will take a long time—but it doesn't have to be this way. Choose a smart way of learning to drive, and you could be on the road within weeks of booking. That's where PassMeFast comes in.

Our intensive and semi-intensive courses represent a more efficient method of driving tuition for learners and instructors alike. That's because you'll be spending your lesson time building up new skills consistently, with your course structured so that you'll be raring to go by the time your test date comes around. Instructors, meanwhile, save on travel time, meaning they can spend more time doing what they do best: teaching.