When Can I Drive after Drinking the Night Before?

Patience is a virtue. And if you drank a lot the night before, you'll need to wait to get behind the wheel. Party season or no party season, there are rules in place aiming to eliminate drink-drivers from our roads—which might be inconvenient for your plans, but puts everyone at less risk.

We'll get to the myths suggesting you can sober up quicker by doing this or doing that... but to start with, we're going to get to grips with the facts, so that you're drink aware, and able to make safe driving choices.

The drink-drive limit depends on where in the UK you’re driving. There are also three ways you can check your alcohol levels: blood, breath and urine.

How long after drinking can you drive? 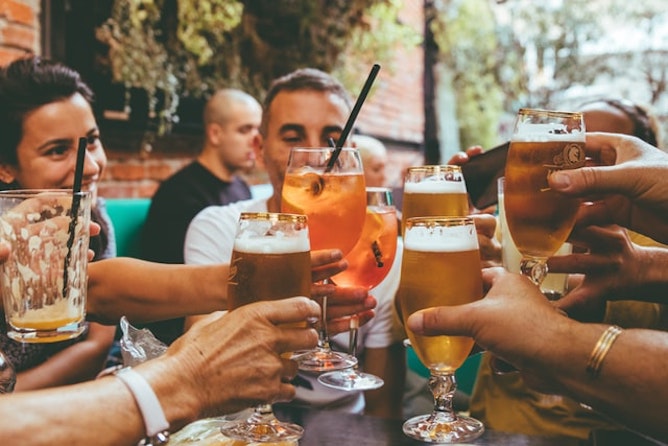 The alcohol limit figures aren't useful unless you can translate them into a format that's practical: drinks and times. This is where measuring units comes in handy. They're a reflection of the strength of a drink, and the amount of it that you consume. In fact, you can work out the number of units in your drink by using this calculation:

Here are the units in some of the more common drinks. Remember that they're strength-dependent and that alcohol affects everyone differently.

One unit of drink takes approximately one hour to leave your system. There are plenty of drink-driving calculators out there, but they come with the heavy caveat: it’s impossible to say exactly how much you can drink and drive to be under the limit. That’s because how alcohol impacts us depends on a whole lot of factors, such as:

The official advice is therefore not to drink anything if you’re planning on driving in hours afterwards—for some people, even one drink could take them over the limit.

When can I drive after drinking the night before? 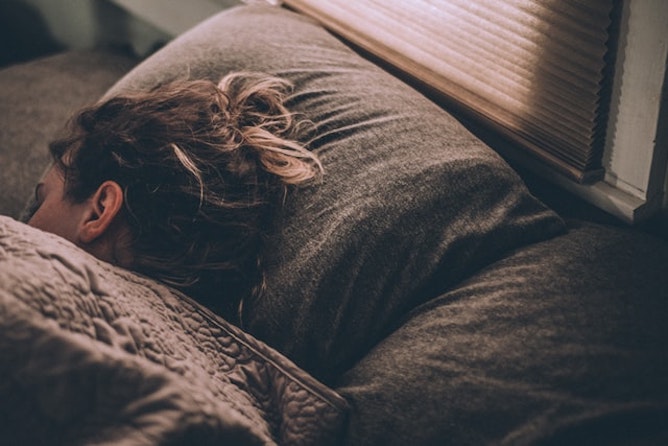 In order to work out roughly when you’ll be under the limit to drive, you need to have some awareness of:

Work on the basis that it takes around an hour to sober up from one unit. So, if you drank 3 high strength pints of beer, one after another, ending at 2am, you would need to wait about 9 hours for the alcohol to leave your system: that's11am. It can be pretty difficult to keep track of things like this, but it's important that you do.

If you know you need to drive the next morning, take a few minutes beforehand to work out how much you are safe to drink, and when you'll need to stop.

How can I check if I’m under the limit?

Alongside your maths, it’s a good idea to keep a breathalyser handy in your car, so you can double-check whether you're under the limit and you’re safe to drive. There are two different types you can buy:

Even with a breathalyser you trust, you should never rely on it totally. If you think you might be over the limit, you shouldn’t get behind the wheel. Here are some of the breathalysers with the best reviews on Amazon¹:

The AlcoSense Pro boasts top reviews from the Sunday Times and its Amazon customers. Noted as user-friendly, it ticks all the accuracy boxes, even estimating how long it will take before you're sober again.² 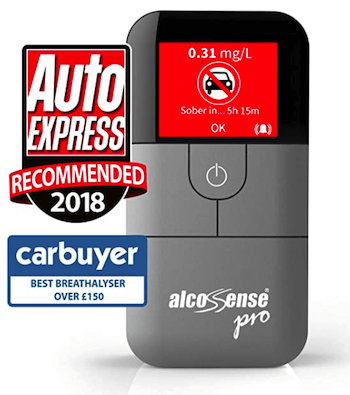 Rated very highly by customers, the AlcoSense Excel features a smaller version of the same sensors used by multiple police forces, giving it a high degree of accuracy. As with all these models, the manufacturers recommend you get it recalibrated once a year (it sounds like they charge about £30 for this), in order to keep its measurements precise.² 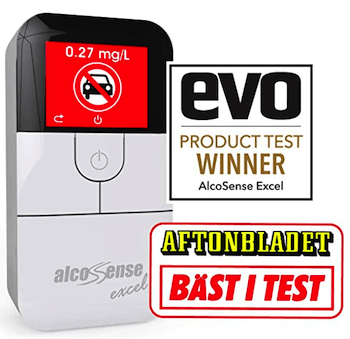 Smaller and more affordable than its big brothers, the AlcoSense Lite 2 maintains the strong customer reviews of the other products from this brand. It doesn't skimp on accuracy, claiming to be the 'best in class', with measurements to one decimal place, and a clear warning message on the screen if you're over the drink-drive limit.² 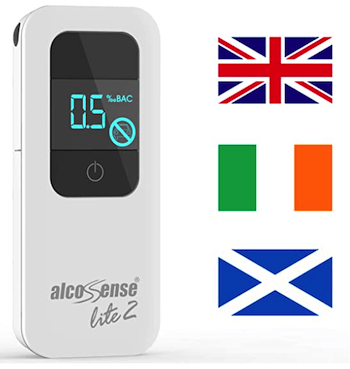 How does alcohol affect driving?

Alcohol alters your behaviour—which is often why people choose to drink it. However, these changes can cause serious problems if you get behind the wheel while it’s still in your system.

What’s the penalty for driving under the influence? 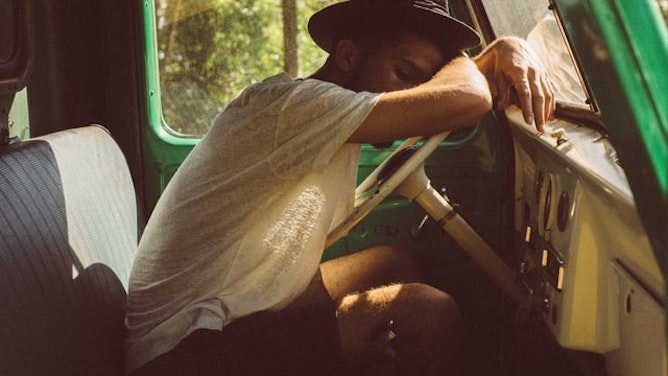 Punishment for driving under the influence varies, depending on your actions and their consequences. If you’re stopped randomly and found to be over the drink-driving limit, you could face:

Should the worst happen, and you cause an accident resulting in someone’s death, you could get:

In terms of insurance, your premium is likely to increase significantly. Drink driving is a deliberate action, so you’re a much greater risk on the roads than other drivers.

Of course, it shouldn’t just be the punishment that influences your behaviour; the penalties are a reflection of the serious consequences that can occur if you’re not on top of your game. You only need to listen to stories about accidents to realise there are more important things in life than the convenience of driving while alcohol is still in your system.

If you’re struggling with peer pressure, and your mates urge you to have ‘just one more’, imagine the guilt you’d carry if you were to injure or kill someone because of your actions. It really is a sobering thought.

What’s the quickest way to sober up?

Unfortunately, there isn’t actually anything you can do to sober up faster. Re-hydrating, eating, taking a cold shower, getting fresh air or drinking a coffee might all help you to feel more alert, but they aren’t going to reduce the alcohol levels in your body.

What can I do at a party to stop myself from drinking so much?

Peer pressure is a huge factor in drinking too much. The good news is that there’s now less stigma, generally, around not drinking than there used to be. There are also some practical things that can help if you know that you struggle to resist drinking too much when you’re in a social setting:

And if you aren’t sure whether your drinking has become problematic, take a look at this guidance from the NHS.

Can I drive when I feel sober?

Feeling sober and being sober are two different things. You might feel back to normal, but if your blood or breath alcohol readings don’t reflect that, then you are still impaired and you shouldn’t get behind the wheel. If you were involved in a collision, you’d be tested on the facts, not your feelings.

What if I have a driving lesson the morning after a night out?

Driving under the influence is a serious offence, and no less so if you’re a learner driver. You should be mindful of anything that could affect your driving performance, especially given your lack of inexperience. You risk getting your licence at all if you’re caught, and as well as endangering yourself and others on the road, you also risk your driving instructor’s job. And if your driving instructor suspects that you’re under the influence, they will refuse to take you out. Cancel your lesson if you're not sure whether you're under the limit.

Do I have to provide a breathalyser test if I’m stopped?

Yes, if the police ask you to provide a breathalyser, blood alcohol or urine test, you must do so. The only logical reason to refuse would be that you think you’d fail it. You could get 6 months in prison, an unlimited fine or a year-long ban from driving if you refuse to provide a specimen when asked.

What if the police’s breathalyser test is wrong?

Should you fail a breathalyser test, you’ll be taken to the station. There, you’ll be given two more tests. The lowest one will be the figure recorded, so in essence, you get three goes at passing. However, the tests the police use are pretty accurate—so chances are that if you fail one, you’re above the limit.

¹ as of November 2021 ² If you use these links to make a purchase, we earn some commission. It won't cost you any more than going directly to the site. We plough all commission we receive right back into PassMeFast so we can continue to improve our services and keep providing you with free and helpful content.