Which Areas of the Country Have the Most Driving Instructors?

In some parts of the UK, learners are almost spoilt for choice when it comes to learning to drive, with more instructors than you can shake a stick at. Others, however, seem to have lost the postcode lottery, with only a couple of ADIs available locally. But which areas of the country have the most driving instructors?

To piece together the answer, we plumbed the depths of the DVSA's stats database. There, we uncovered a wealth of information on exactly how many driving instructors there were in each postcode area of the country. So, how many ADIs are there where you live? And will it impact on you learning to drive? Read on to find out.

Before drilling down to local level, it's important to know how many approved driving instructors (ADIs) there are in the country as a whole. Figures for June 2018 show that there were 39,194 ADIs registered with the DVSA, alongside 2,069 trainee instructors. When compared to the population as a whole, this means that there is:

With stats like these, it's easy to see why ADIs are often in high demand. In fact, this trend has actually accelerated in recent years, with numbers of registered instructors in decline. 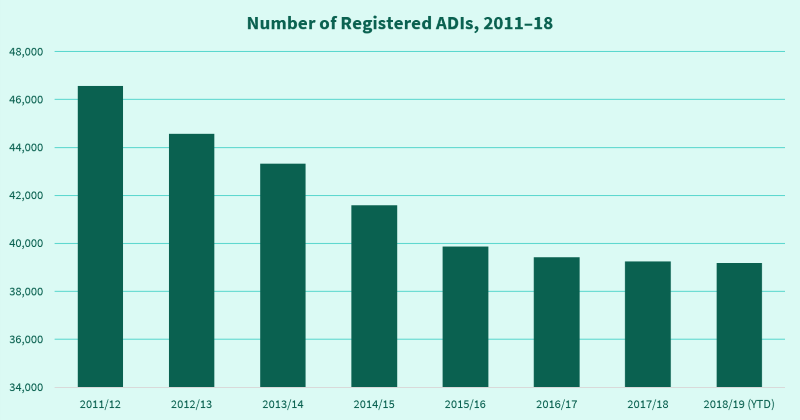 While these numbers may, understandably, be alarming for learner drivers, it's worth noting that new applications to become a potential driving instructor (PDI) are on the rise—up from 4,985 in 2011/12 to 7,635 in 2017/18. The number of new ADIs joining the register, meanwhile, was 3,339 in 2017/18—the most of any year for which data is available.

Which postcode areas have the most (and fewest) ADIs?

While the DVSA doesn't provide a town-by-town breakdown of where ADIs are located, a full list of the number of ADIs in each postcode is available. Using this, we identified the areas of the country which have the most and fewest driving instructors—here are the top and bottom ten.

The figures above aren't too surprising. The top ten is made up exclusively of areas covering some of the nation's largest cities, while rural areas make up the majority of the bottom ten.

It may come as a surprise to see two London postcodes so far down the list, but it actually makes sense—the EC and WC postcode areas represent the very heart of the capital, where relatively few people actually live (and where not many drivers would dare to tread).

Of course, there are 100 postcode areas that don't fall into the top or bottom ten—to see how many ADIs there are in your area, check out the map below.

Which areas have the most ADIs as a share of the population?

While the figures in the section above are interesting, they say more about which postcode areas have the most people, rather than how easy it is to find an ADI in those locations. After all, the Birmingham postcode area, which came top, has 1,540 ADIs—but also has the biggest population in the country, at 1,904,658.

A better measure, then, is to work out how many ADIs there are as a share of the population. This produces some very interesting results.

Some fascinating patterns jump out when we examine the data. The top ten is dominated by postcode areas from outer London, joined by Bradford, Huddersfield and Luton.

The common link is that these are all suburban areas or large towns—areas with a sizable number of people, but without being so densely populated as to make driving tricky. Another factor behind the large number of ADIs here may be that locals need to commute to nearby big cities—into central London for those in the south east, or to Leeds for the Yorkshire towns.

It's also worth noting that some learners may be choosing to take their lessons away from their actual home. Inner London, for example, has no practical test centres of their own, meaning that learners need to head out to the suburbs to take their test—driving the number of ADIs up in these areas.

The bottom ten, meanwhile, is an intriguing mix of inner London and rural Scottish and northern English postcode areas. In the former case, London's ever-crowded traffic may put locals off taking up a career on the roads; in rural areas, the need to cover large geographical areas may drive up fuel costs, reducing the profitability of becoming an ADI here.

Where is it easiest (and hardest) for a learner to find an ADI?

Great Britain may have a population exceeding 60 million, but there's one group for whom the number of ADIs really matters—those with provisional licences. While not all of these people will be actively learning to drive, they provide a reasonable rough guide as to the number of potential learners in each area of the country.

By comparing the number of ADIs in a given postcode area to the number of provisional licence holders there, we can make an estimate of the local demand for instructors. Here are the top and bottom areas in Britain:

Let's start by looking at that bottom ten—it's very difficult to ignore the pattern here, after all. The eight postcode areas of inner London make up the bottom eight, with Manchester joining them in the bottom ten. Lerwick is the outlier here, its position as the UK's smallest postcode area by population making it hard to compare with other localities.

The top ten, meanwhile, brings together a diverse range of towns, cities and rural areas. It's interesting to note that the LD (Llandrindod Wells) postcode area also featured in our list of areas with the fewest ADIs—as it turns out, that number was about the right fit for this sparsely populated area. Manchester and East London make the opposite switch—there are a lot of ADIs in these places, but they're spread over huge populations.

I'm interested in learning to drive—will the number of ADIs in my area affect this?

In certain parts of the country, high demand may lead to longer waiting times, potentially delaying your learning process by months—and with it, pushing away the date on which you can finally get your hands on that full UK driving licence.

If you live in one of the areas PassMeFast covers, however, we can help to make the process a little smoother. Our intensive and semi-intensive courses mean that you could complete your driving lessons within weeks of booking, even in some of the busiest parts of the country. Better still, with our fast-track practical service, you could be taking your test well ahead of the standard waiting times you'd typically find on the DVSA website.

If you're interested in what we have to offer, take a look at our detailed course rundown—or speak to the team by calling us on 0333 123 4949.