Looking to learn a new skill this New Year? Get 5% off our courses if you're a student. Find out more here

The first hurdle any aspiring driver needs to clear is the theory test. Since its introduction in 1996, everyone hoping to attain their licence has had to work their way through its multiple choice questions, with hazard perception added into the mix in 2003. However, this doesn't always prove the easiest task. In fact, tougher testing means that theory test pass rates have fallen drastically over the past decade.

One thing that may surprise you, though, is that theory test pass rates also vary by test centre. Recent stats from the DVSA reveal, though, that pass rates range from a low of 24.4% to a high of 83.3% depending on test centres. Want to see how your local area fares? Read on for everything you need to know.

Stats across Great Britain Pass rates by test centre Regions and nations What do the theory test pass rates mean for me?

This wasn't always the case. While the claims that “everyone passes the theory test” have always been exaggerated, pass rates were appreciably higher in years gone by. The graph below shows the evolution of theory test pass rates since 2007/08.

A number of changes in these years influenced this decline: more multiple choice questions (50, up from 35); new case studies; and a completely refreshed question bank in January 2013. The latter seems to have had a particularly large effect—pass rates dropped from 58.9% in December 2012 to 50.4% in January 2013.

So, the theory test is harder to pass than you might think. But surely where you live shouldn't have an effect on your chances of passing, right?

Well… it's complicated. It's certainly true that the theory test you take will be the same at any given test centre—in contrast to the practical test, which is inevitably influenced by local road conditions. As such, there should be no specific local factors that affect your theory test result.

This doesn't mean, however, that pass rates are identical across the country. In fact, there's a wider spread of results across theory test centres than there is for practical test centres!

So, which test centres saw candidates excel—and which had a less distinguished record? 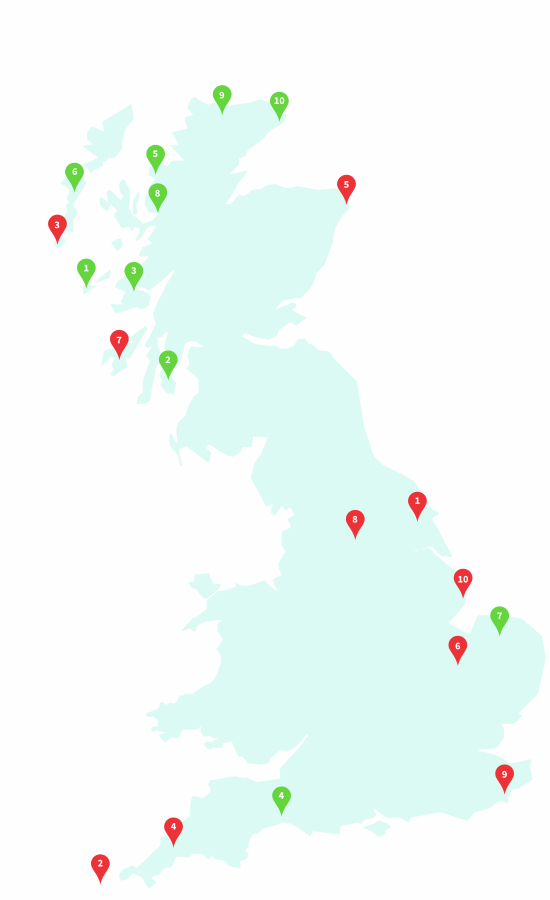 If you're familiar with the pass rates for the practical test, the dominance shown by the Scottish Highlands and Islands may not come as too much of a surprise. It may be a little more shocking, however, to see so many rural test centres languishing in the bottom ten, too.

The reason for this is quite simple, though: very few tests take place at these test centres—fewer than 100 per year in almost all of the top and bottom ten test centres (with the exceptions being Wick and Bradford). With such low numbers, the impact of a few results can skew the statistics dramatically.

So, how do things look at the test centres in our major cities? Thankfully, we've got the stats for that, too.

There are some surprises here. London, which suffers from some of the lowest practical test pass rates in the country, sees itself firmly in the middle of the pack here, with pass rates close to the average. High-flyers include Edinburgh, Cambridge and York, while it's Birmingham and Leicester who join Bradford towards the bottom.

Of course, the country's cities aren't the only places with a story to tell. What do theory test pass rates look like on a broader scale? Let's find out.

While, as we've discussed, local factors and varying population sizes can result in wide variations between test centres. More interesting, however, is that a disparity is also apparent when comparing each region of the UK. You can see the full region-by-region breakdown across Great Britain in the map below. 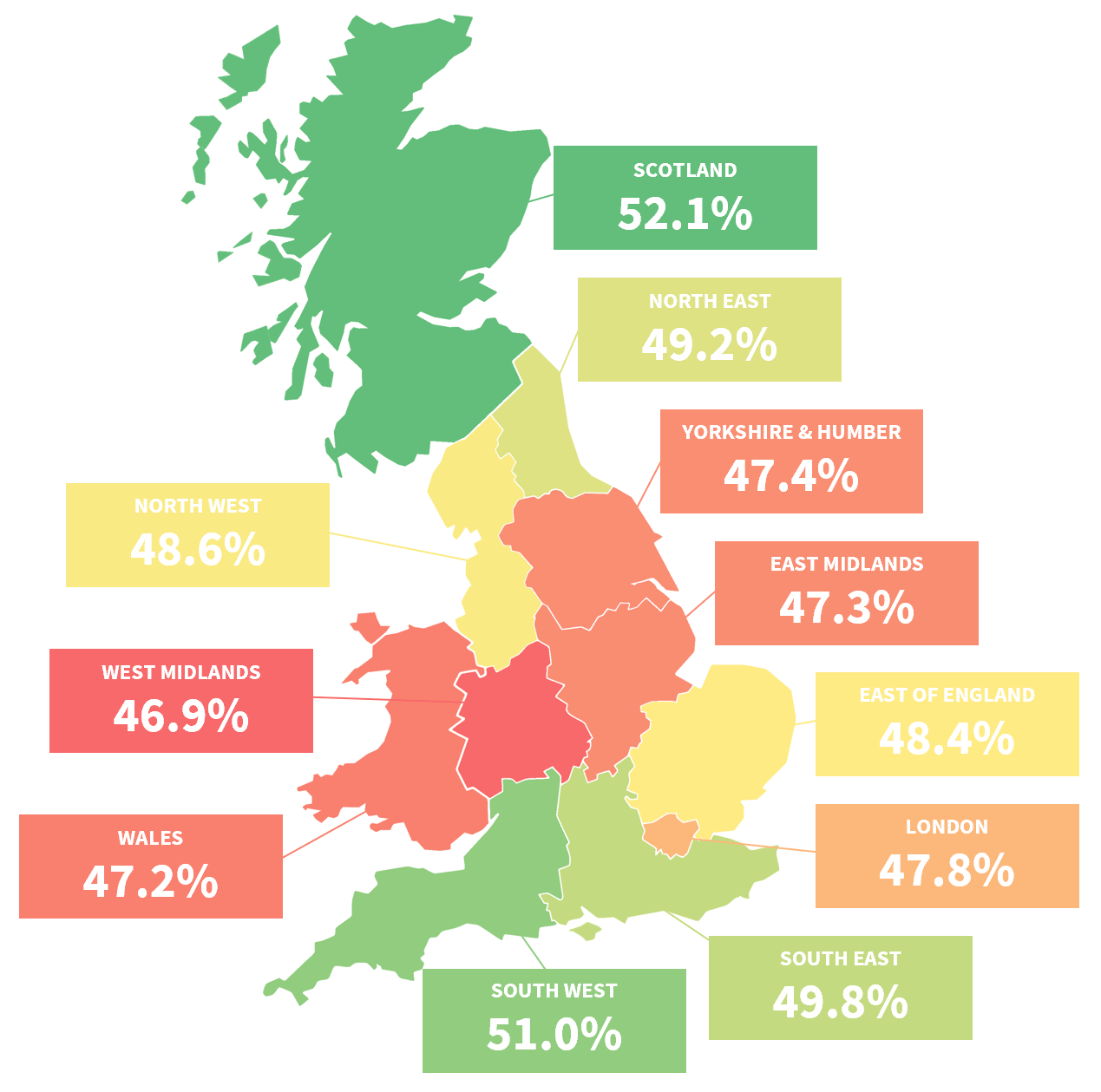 Here, as is often the case with driving-related stats, it's Scotland which comes out on top. Earning the ignominy of last place is the West Midlands, where the pass rate stood at 46.9%.

When comparing the nations of Great Britain, a 52.1% pass rate makes Scotland top dog once again. England's pass rate of 48.5% is only fractionally below the overall national average of 48.7%—unsurprising, as 88% of all theory tests in Great Britain are taken in England. Wales' 47.2% sees it finishing last, only a little behind Northern Ireland's 47.6%—though theory tests here aren't counted in with the overall national statistics, making direct comparisons a little tougher.

What do the theory test pass rates mean for me?

While it's always interesting to dive into the goldmine of statistics available from the DVSA, the truth is that this info has no bearing on your test result. After all, every single candidate at any test centre in the country is taking the same test.

If you've been spooked by the figures, though, here are a few handy hints to help you walk out of that theory test centre with a pass certificate in hand.

If you book a course with PassMeFast, one thing you won't have to stress about is finding a test date. We'll arrange a test that meets your requirements, and can even change your theory test to take place on a date that suits you.