Overtaking and Undertaking: What are the Rules?

Ever heard that the biggest danger on the road is other drivers? That may well be true, but sometimes it's good to remember that, to the rest of the general population, that actually means we're the risk!

When someone's in our way, and we're impatient to get past—we've got places to be, don't you know?—it's our responsibility to make sure we're overtaking safely and within the guidelines of the Highway Code.

There are rules on overtaking, not overtaking, undertaking, overtaking on the second Sunday in a month, but only where it also happens to be a full moon... okay, that last one may not really exist. Don't get us wrong, we're grateful for the advice. It's just that sometimes it can seem a little overwhelming.

So, we've put together an easy-to-consume guide on all the overtaking rules you need to know to pass your theory test and keep you (and others) safe when you're out on the roads.

Since we drive on the left in the UK, you should almost always overtake on the right (we’ll come back to undertaking—overtaking on the left—a little later). Rules 162 and 163 of the Highway Code explain how to go about overtaking safely. As with most elements of driving, the key is in the preparation.

When you’re planning to overtake, you must make sure that you have plenty of time to complete the manoeuvre. Remember, you’re likely to be pulling out onto the wrong side of the road: you don’t want to see traffic coming towards you, and—trust us—they don’t want to see you heading their way either! Ensure that once you’ve overtaken the vehicle in front, you’ll have enough room to slot back in in front—without forcing them to have to hit the brakes. Don’t blindly follow another vehicle into overtaking: they have (hopefully) assessed the risks, but you can’t be sure that there’s enough time for you to get past, or enough of a gap to move into.

Then it’s a matter of mirror—signal—manoeuvre. Check that nobody is overtaking you; looking over your shoulder will help you see your blind spot. Once you’re sure that it’s safe to do so, signal right, so that vehicles in front and behind can see your intentions. Only then begin your overtake. When you’re making your pass, keep a good distance from the vehicle you’re overtaking.

You want to complete the manoeuvre quickly, so that you’re able to get back into the left lane and out of the path of oncoming traffic. Take particular care when overtaking at night: it can be difficult to tell which lane a vehicle is in by their headlights, and you may not be able to judge speed so accurately.

When is overtaking not allowed?

Because of the danger associated with overtaking, there are some instances where it is simply not allowed. Sometimes you’ll be given a visual reminder, but at other times you’ll have to use your own hazard awareness skills to establish whether or not it’s a suitable time to overtake. 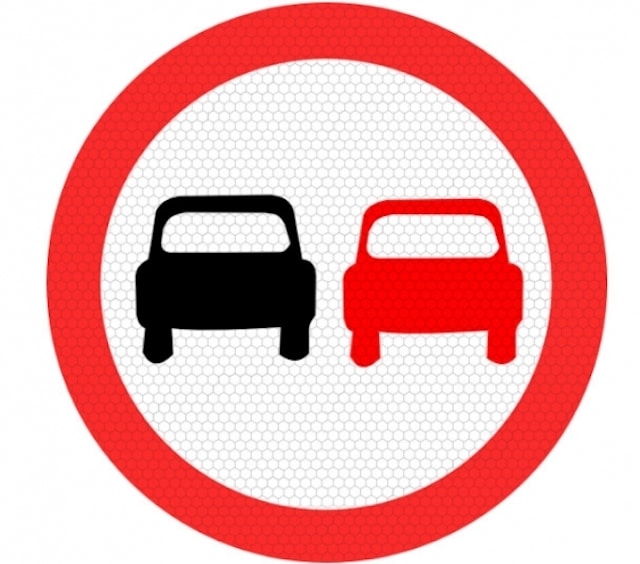 As with any sign, your first clue as to its meaning is the colour and shape. The no overtaking sign is circular, with a red outline. Red circle signs are generally prohibitive, ie. they are there to tell you not to do something. The symbols in the sign depict 2 cars side by side. The one on the right is overtaking the car on the left, and is shown in red: a forbidden action.

The only time when you may disobey a no overtaking sign is if you come across a cyclist or horse rider. You still need to give them plenty of room as you pass, but you may overtake them, providing it’s safe to do so.

Take our quiz to refresh your road sign knowledge.

When there are solid white lines 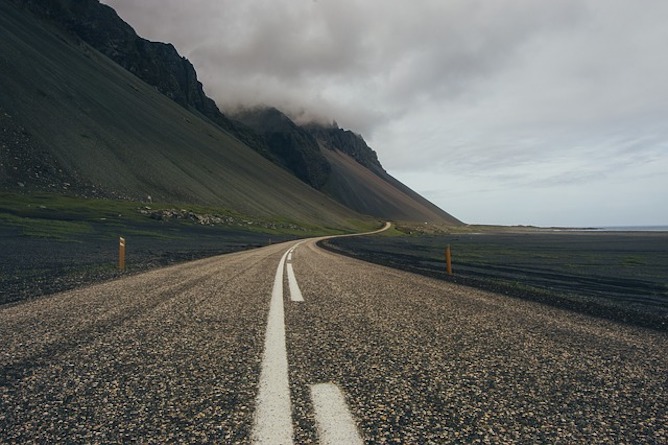 Even if you don’t see a no overtaking sign, you must still look at the road markings to determine whether overtaking is permitted. In this case, you’re looking for any white lines in the centre of the road, separating your vehicle from oncoming traffic. Where there are double solid white lines, these indicate that you should not cross or straddle them, regardless of the direction you’re travelling.

The only exceptions are where the road is clear, and:

Where there are double white lines, but the line nearest to you is broken, you may cross over so long as it’s safe to do so.

When you can’t see far enough ahead

Approaching the brow of a hill? Coming up to a corner or bend in the road? If you can’t see far enough in front of the vehicle you’re wanting to overtake, it’s extremely dangerous to start overtaking. Again, road signs and markings are your friend. They will often warn of bends, hump bridges and hidden dips.

When there are other upcoming hazards

Other occasions when you shouldn’t overtake include situations where you may ‘come into conflict’ with another road user. Whether you’re approaching a pedestrian crossing, coming up to a junction on either the left or right, or see a level crossing ahead, you should avoid any attempt at passing the vehicle in front. 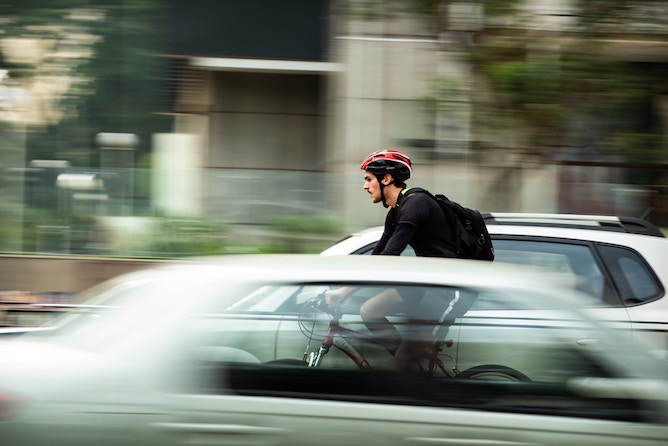 With more and more of us trying to reduce our carbon footprint, chances are you’ll come across cyclists on many of your journeys. We already know that no overtaking signs and road markings don’t apply when passing bikes—but what about all the other overtaking rules?

You should treat cyclists like you would any other vehicle: by making sure there’s enough time to overtake them safely, enough room in front to avoid cutting them up, and leaving enough space between you and the bike while you drive past.

This last point is particularly important. The Highway Code advises giving bikes at least as much room as you would when overtaking a car. They may be smaller, but cyclists don’t have the same level of protection as they would in an enclosed vehicle. Be aware that cyclists may be inexperienced at travelling on roads—there are no ‘P’ plates for pedal bikes—and slower cyclists might wobble as they ride. Neither is it always possible for cyclists to maintain a consistent path: they may swerve to avoid potholes, drain covers or other obstacles and move over to the right when wanting to turn.

Sadly, the ‘plenty of room’ overtaking rule is often ignored, contributing to the many cycling incidents reported each week. In order make the roads safer for all users, there are proposals underway to specify a minimum distance deemed safe for overtaking cyclists.

In fact, police officers in Cambridgeshire are already testing a scheme whereby drivers must leave at least 1.5 metres between their vehicle and the cyclist they are overtaking. Those who fail to do so are given £100 fine and 3 points on their driving licence.

Large vehicles often travel relatively slowly—they are subject to different national speed limits than cars, and many also have restricted engines. Because of this, you’re more likely to want to overtake them.

Rule 164 of the Highway Code deals with the rules for overtaking large vehicles. To see whether there’s enough room to overtake, drop back. You’ll get a bigger field of vision, and the driver of that vehicle will also be able to see you in their mirrors. Only overtake when you’re sure there’s enough time to get past the vehicle.

Remember, it will take longer to pass than a car, so you should never follow anybody else out until they’ve made it safely back to the left side of the road. If there’s a long queue building up behind you, you may feel peer pressured into overtaking the large vehicle before it’s sensible to do so. Just remember that your safety—and the safety of those in oncoming vehicles— is more important than worrying about what anonymous drivers behind you think.

Overtaking on the left: is undertaking illegal?

Passing vehicles on the inside lane, also known as undertaking, is not generally permitted in the UK. There are, however, 2 instances where it is allowed. Make sure you know them both, as they often crop up in the theory test.

When the vehicle in front is signalling right

If you’re stuck behind a vehicle waiting to turn right, and there is space to overtake them on the left, then you may do so. You should not undertake if it requires you entering a bus or taxi lane while they are in operation—if you do, you could be fined. When passing on the left, take extra care to check in your mirrors and blind spot for cyclists, and always check for any indication that the driver in front has changed their mind about turning. 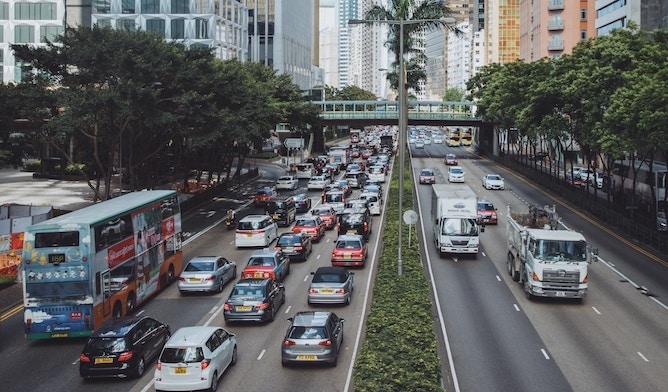 Generally speaking, when overtaking on a motorway (or any road with multiple lanes in one direction), you should always move to the lane on the right of the vehicle you wish to pass. This is why middle-lane hogging is so dangerous: it forces other drivers to move across 2 lanes in order to overtake you, rather than risk undertaking on the inside.

However, when the road is congested, or there are signs warning you to ‘stay in lane’, you may find that a queue in the left hand lane is moving faster than traffic on the right. While you shouldn’t switch to the left in order to undertake, you are allowed to keep up with the traffic in your own lane. This may result in you undertaking vehicles to your right, but it is considered less dangerous than weaving in and out of other lanes to overtake.

Learn more about driving safely on motorways with our guide.

Of course, it’s not just moving vehicles on the roads with you. You may need to get past parked cars or another stationary object. Since the obstruction is on your side of the road, you should always give way to any oncoming traffic before progressing. You should still perform your usual checks, and watch out for pedestrians who may be hidden from view.

When somebody is overtaking you

When being overtaken, try to keep both your course and speed consistent. If necessary, you may slow down, but driving erratically or speeding up can seriously jeopardise the overtaking driver, as they have judged it safe to perform the manoeuvre on how you were driving before they began to pass you. When you’ve been overtaken, you may need to slow down to maintain an appropriate gap (2 seconds)—you don’t want to end up accidentally tailgating them.

① Are you allowed to break the speed limit when overtaking?

Speeding is never allowed—so, although you should aim to get back into your lane quickly after overtaking, you should always keep below the speed limit. Otherwise, you run the risk of getting points on your licence or having to attend a speed awareness course. If you’re finding you need to break the speed limit in order to safely complete an overtaking manoeuvre, know that your hazard assessment skills need work: next time allow for more time before pulling out.

② Can you overtake on a one way street?

If you’re travelling on a multi-lane one way road, you should choose a lane based on which is most appropriate for the direction you’re travelling, rather than speed. As such, you can keep up with the traffic in your lane, and may overtake on either the right or left. It’s therefore particularly important to keep checking your mirrors to make sure you know what’s going on around you.

Well, there you go! Hopefully you're now clued up on all the overtaking rules, so you can avoid being that dangerous driver, and end up getting points on your licence, or worse—in an accident.