What Are Smart Motorways—and Are They Unsafe?

In an age where we rely on smartphones and new technology to carry out many of our basic needs, it makes sense to start applying such innovation to our roads. That's exactly what recent governments had hoped to do, by rolling out so-called 'smart motorways' across many of the nation's most heavily used highways. These schemes can accommodate more traffic, without the expense and disruption that would be caused by widening existing roads.

But the expansion of smart motorways has been plagued by safety concerns—and concerned campaigners celebrated an announcement in January 2022 that halted the proposed rollout of more all-lane running (ARL) motorways... for now. So, what's the deal? Are smart motorways still the future of Britain's roads—and what's being done to reduce any risk they pose? 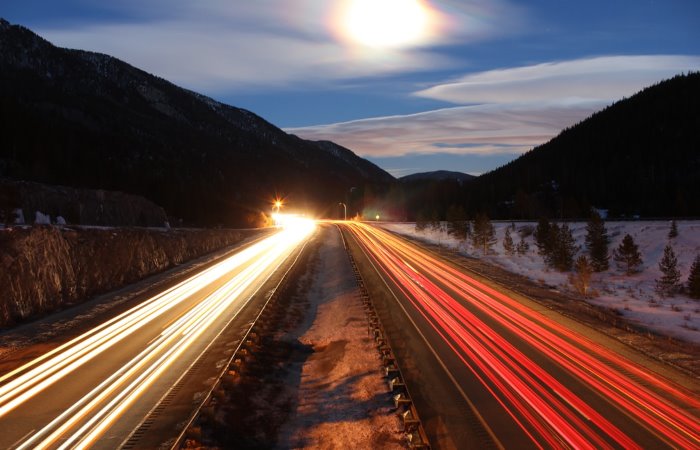 Most of us have experienced smart motorways, but what exactly is it that makes them so 'smart'? Well, they use what are known as active traffic management techniques to spot hazards and control the movement of vehicles. Smart motorways employ technology to track incidents, measure traffic levels and change speed limits in real time. This means instructions to drivers are often updating in response to developing hazards. By doing this, smart motorways aim to promote a steady flow of traffic.

For example: a camera notices an accident occurring at a certain point on the motorway. In response, speed limits along the preceding stretch of road are changed to 50 mph, reducing congestion around the crash site. Perhaps the hazard ends up blocking one or more lanes. The solution? Open the hard shoulder as an extra lane to allow more cars through the area at a time. Here we can see how modern technology is really useful when it comes to both road safety and easing the journeys of many drivers.

What are the different types of smart motorways?

There are different main levels of 'smart' in the various motorway schemes being built around Britain, namely:

These types of motorways retain a permanent, traditional hard shoulder that drivers only have the right to use in an emergency. What makes them 'smart' is that they are able to utilise cameras to adapt speed limits according to what's happening on the road ahead. In normal circumstances, the national speed limit applies—but where you see a different speed shown on an overhead gantry, this is the legal limit to follow.

Sections of the M1, M6 and M42 are among those roads designated Dynamic motorways. Just like Controlled motorways, they allow for variable speed limits—but in addition, there is the option to use the hard shoulder as a normal lane when signs advise that it is open. The idea is to alleviate a build-up of heavy traffic at busy times. A red 'X' on the gantry above the lane indicates that it remains a hard shoulder, which means it cannot be used except for emergencies.

All-Lane Running motorways are the most controversial of the three types of smart motorway. They go one even further than Dynamic highways, by getting rid of the hard shoulder completely—apart from when there is an incident that requires it. Drivers are free to make use of the hard shoulder at all other times, and where possible should only stop in one of the emergency refuge areas that are dotted at intervals along the roadside. 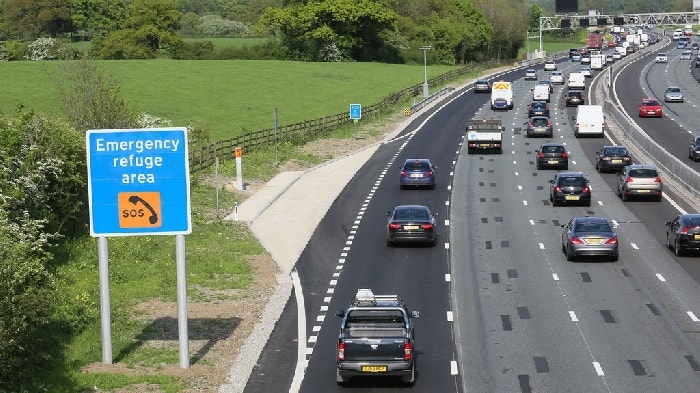 Although motorways in the UK are typically safer than other types of roads, there have been concerns over the implementation of ‘all-lanes running’ policies. A BBC Panorama documentary in 2020 highlighted 38 fatalities that occurred on smart motorways between 2014 and 2019. The problem is that where hard shoulders are eliminated, vehicles experiencing a breakdown or other form of emergency are left in a vulnerable position.

To combat this issue, smart motorways have emergency refuge areas (ERAs), which are essentially lay-bys, dotted at least every 1.5 miles along the road. You can recognise them by their large blue and orange signs and orange road surface. They provide telephones so that drivers can call services for help.

However, following several preventable accidents, such as one family’s experience of a lorry ploughing into the back of their car on the M6, there have been calls for some time to make smart motorways safer.

The Department of Transport took note, and commissioned a report by the Transport Committee. In January 2022 the government announced that they accepted the findings in that report, and explained how they would follow the recommendations to reduce the risk to drivers and their passengers.

What is being done about the dangers of smart motorways? 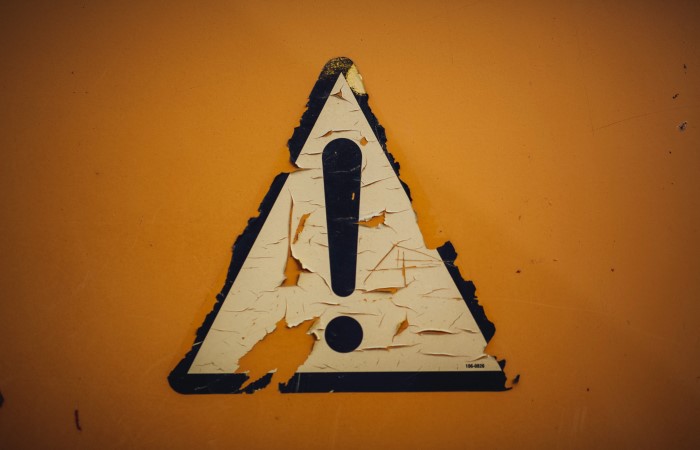 First of all, the planned conversions of Dynamic motorways to new All-Lanes Running motorways have been paused until there is at least five years’ worth of safety data available. In the meantime £900 million is being pumped into existing smart motorways, with nearly £400 million of that earmarked for building and retrofitting more emergency refuge areas. This should lead to a 50% increase in ERAs by 2025.

The rest of the money will go towards things like:

✔ Installing Stopped Vehicle Detection (SVD) technology: as noted in our April 2021 news roundup, these are cameras that automatically pick up stationary vehicles and communicate this information to control rooms, so that gantry signs can be changed quickly to close the affected lane(s).

✔ Extensive campaigns by National Highways to educate drivers about how smart motorways work.

Grant Shapps, Secretary for State for Transport at the time of the announcement, said:

...these measures will ensure that our roads continue to be among the safest in the world – helping drivers not just to be safe, but crucially, to feel safe and confident when driving. 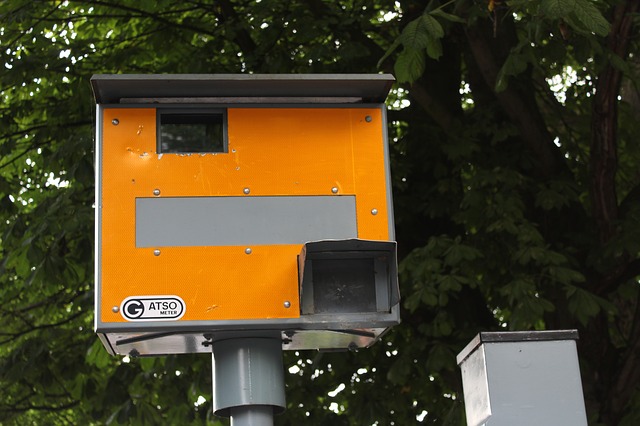 Alongside these improvements, authorities are also clamping down on those who view smart motorway instructions as suggestions, rather than the law. If the speed limit sign changes to 60mph, the red ring around it indicates that to continue at 70mph (the national speed limit for cars on motorways) is actually illegal. There is a short grace period to enable drivers to slow down safely, but anyone caught speeding beyond that will be slapped with a fine and points on their licence.

Furthermore, driving in a lane with a red 'X' above it will earn you a £100 penalty. As covered in our March 2019 news roundup, though, this hasn't stopped some drivers—23% have admitted to flouting this law, potentially putting lives at risk.

Looking to the Future

For some, these improvements don't go far enough. Claire Mercer, whose husband Jason's tragic death could have been prevented by the presence of a hard shoulder—or technology that closed his lane quicker—did welcome the changes announced. But she also vowed to continue legal action, claiming that the roads wouldn't be safe until hard shoulders were reinstated permanently.

There's still a worry that people will become used to the hard shoulder being an extra lane. You could end up with drivers using it inappropriately, even in situations where it is restricted to emergency use only.

It remains to be seen whether the public can be better educated and the advances in technology will make the difference needed to smart motorway safety. If they do, then expect the data to support resuming ALR motorway builds in a few years' time. 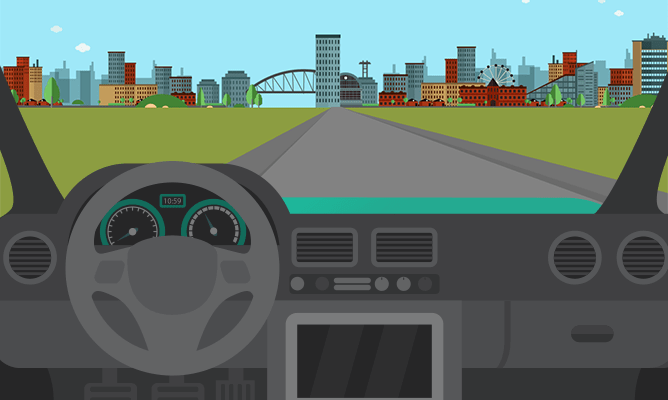 They promote good traffic flow and ease of navigation.

You can follow instructions as your journey progresses, knowing any developing hazards will be taken into account.

Highways England are working on improvements to the current system.

Still among the safest roads in Britain.

Use of the hard shoulder as a lane has caused crashes and can increase the time it takes for emergency vehicles to reach people.

They don't reduce traffic or emissions.

Smart motorways make use of the sophistication of modern technology—which is likely to improve the efficiency of Britain's motorways. Because this style of road is still fairly new, there are a number of changes that need to be made before we hail them as a success. To be fair, transitional periods always involve some kinks that need to be ironed out. The problem is, when it comes to motorways, these kinks can be life-threatening.

Nevertheless, the priorities behind smart motorways are positive for drivers. Less congestion? Great! More lanes to drive in? Thanks! Plus, the extensive use of up-to-date technology is innovative and impressive. Just remember, these motorways are smart—so pay attention to what they tell you to do!

No matter your view on them, Britain's roads are changing and you need to keep up! If you're ready to take on smart motorways for yourself, make sure you have a look at all the information and help PassMeFast can provide.

1. Can I get a speeding fine for not following variable speed limit signs?

Yes! If you’re caught driving above the variable speed limit (usually displayed on an overhead gantry sign or a sign at the edge of the road), you are breaking the law and can receive a minimum speeding ticket of £100. And remember, it’s not just your bank balance at stake: speeding can result in at least 3 points on your driving licence, too. This should be a deterrent for all potential speeders, and most particularly those who've passed their test in the last two years—who risk losing their licence if they make another such mistake within that timeframe.

2. Some drivers don’t follow the variable speed limit signs. I worry that if I slow down, it’ll be more dangerous than staying at the national speed limit.

Smart motorways can only work safely if drivers observe the rules. But, and we’re going to get a little cheesy here, BE THE CHANGE. It only takes one driver to influence another driver to influence another… So set an example, reduce your speed—and revel in the fact that you, at least, will not be getting a speeding ticket. Staying under the variable speed limit is not only in keeping with the law, but will make things less risky for everyone; you just don’t know what type of incident is up ahead. There are always going to be some people who flout the rules, but make sure that’s not you.

3. Are smart motorways being scrapped?

Smart motorways are not being scrapped. However, some all-lane running (ARL) schemes have been put on pause until more safety information is gathered. Roads already being converted into smart motorways will continue as planned, with additional safety measures —such as more emergency refuge areas and Stopped Vehicles Technology—in place.

4. What motorways in the UK are smart?

As of the latest update of this article (April 2022), there are about 375 miles of operational smart motorways in the UK. 235 of these do not have a permanent hard shoulder. [caption id="attachment_20702" align="aligncenter" width="668"] 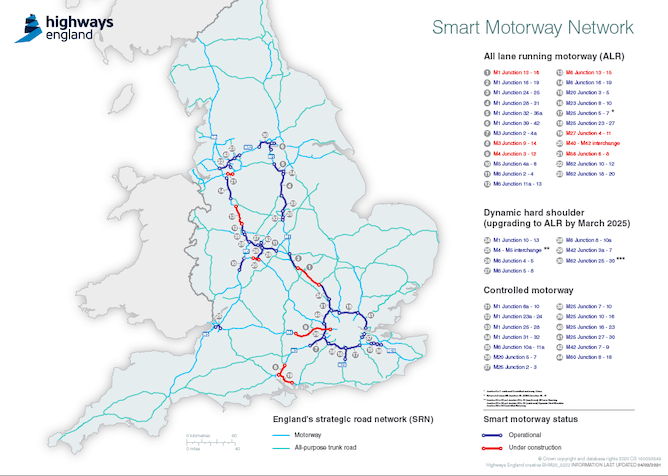 5. When can you use the hard shoulder on a smart motorway?

6. Sometimes I come out of a variable speed limit zone and traffic's running smoothly. So what’s the point in smart motorways?

The point of smart motorways is to keep vehicles moving—so actually, in this case, they’ve done exactly what they set out to achieve. You might have caught the tail end of an incident, or the lower speed may have prevented long queues from building up. Whatever the case, the fact that you were able to avoid stopping and starting is great for you, your frustration levels, and even your fuel gauge.

To stay up to date with the latest driving news and tips, keep checking in with the PassMeFast Blog!